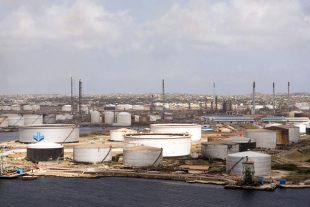 In the early 20th century, oil was discovered off the coast of Venezuela. And Curaçao was the perfect location for Royal Dutch Shell to capitalize on the new black gold, thanks to the Schottegat: a large natural harbor capable of handling massive barges and tankers. After the 1915 opening of the Isla Refinery, life on the island would never be the same.