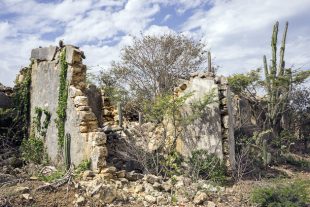 Armed with only a vague notion of the hike we were supposed to be embarking upon, we set off into the cactus fields and brambles near Playa Port Mari. Online, it had been described as a “History Trail,” and the printout we grabbed at the dive shop called it a “Bird Trail.” But we shortly discovered there wasn’t much of a “trail” of any sort. Let’s just say, a machete would have come in handy.